Some of the greatest artists, scientists, and world leaders of all time were deeply inspired by their feline companions. Here is a list of a few notable cat people and their cats!

Earnest Hemingway
Hemingway shared his Key West home with over 30 cats. That's a lot of cats! Ernest Hemingway was given a six-toed cat by a ship's captain, and some of the cats that live on the museum grounds are descendants of that original cat, and many of them have six toes. What made cats so special to him? He claimed that "a cat has absolute emotional honesty; human beings, for one reason or another, may hide their feelings, but a cat does not." 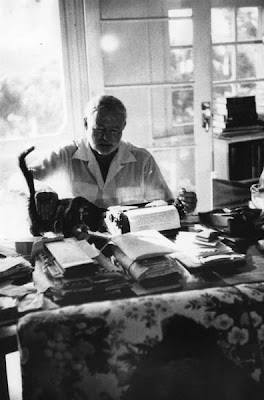 Sir Isaac Newton
Sir Isaac, famous for his laws of motion and gravity, was a cat lover who was deeply concerned about the welfare of his feline friends. Perhaps one of his lesser known accomplishments was inventing the cat door, so that his experiments would not have to be interrupted by his cats wanting to go in and out of the house.
Charles Lindbergh
Charles Lindbergh's cat, Patsy, sometimes accompanied him on flights (though not on his famous flight), how adorable is that? A Spanish stamp commemorating his record-breaking flight from New York to Paris shows Patsy watching as his plane took off (see below). 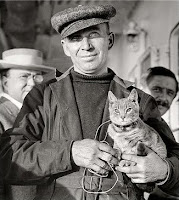 Freddie Mercury
This famous lead singer of the band, Queen, had a favorite tortoiseshell cat named Delilah. He loved his cat so much, he even dedicated Delilah, a song released on the album "Innuendo." When on tour, he would call London to talk to his cats.  Freddie dedicated his first solo album, "Mr. Bad Guy," to his beloved cats; Tom, Jerry, Oscar, Tiffany, Delilah, Goliath, Miko, Romeo, Lily. He is shown below holding Oscar and Tiffany. 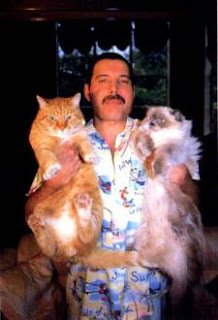 Edgar Allen Poe
Poe used cats as symbols of the sinister in several of his stories, although he himself actually loved cats. His tortoiseshell cat, Catarina, was the inspiration for his story The Black Cat. In the winter of 1846, Catarina curled up on the bed with Poe's wife, who was dying of tuberculosis, and provided her with warmth and comfort.
Pierre Auguste Renoir
This French artist loved cats and depicted them in several paintings, mostly accompanying a young woman. 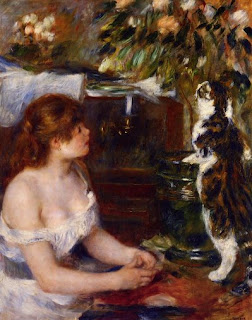 Alexander Dumas (Dumeow!)
Dumas owned a cat called Mysouff. This cat was known for his extrasensory perception of time. Mysouff could predict what time his master would finish work, even if his master was working late. Mysouff once ate all of Dumas's exotic birds, but he still loved the cat just the same. He had another cat named Le Docteur.
Sir Winston Churchill
Churchill has had many cats in his lifetime. One of his favorites was named Nelson, after the famous British admiral. Churchill claimed that “Nelson is the bravest cat I ever knew. I once saw him chase a huge dog out of the Admiralty. I decided to adopt him and name him after our great Admiral.” Churchill's marmalade cat, Jock, slept with his master and shared his dining table. He was a present for Churchill's 88th birthday. Jock was a trouble-maker, known for shredding furniture and carpeting from sharpening his claws. If Jock was late for meals, Churchill would send servants to find him, waiting to eat until the cat was present. Jock was with Churchill on his deathbed. His other cats included Margate, Mr. Cat AKA Tango, Bob, and Nelson. 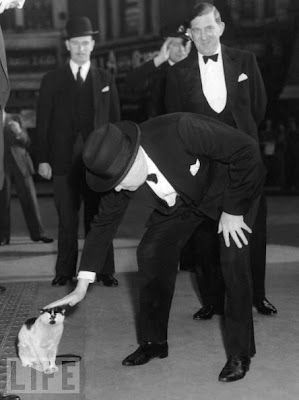 Charles Dickens
He had a cat named William, until he (actually a she) had a litter of kittens in his study! He then re-named her Williamina. Dickens was determined not to keep the kittens, but he fell in love with one female kitten who he named "Master's Cat". She kept him company in his study as he wrote, and whenever she wanted his attention she would snuff out his reading candle.
Claude Monet (Clawed Meownet?)
This famous artist of the impressionist era began his career drawing pastels of cats. Below is his portrait of his own sleeping cat. Adorable, isn't it? 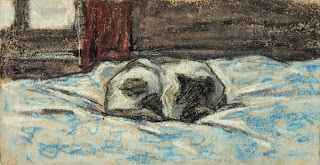 Albert Einstein
Since he was fond of all animals, especially cats, Einstein adopted a male cat, Tiger, who would get depressed whenever it rained. Einstein would talk to his cat during rainy days, claiming he "[knew] what [was] wrong, dear fellow, but [he didn't] know how to turn it off."  Einstein also said, "A man has to work so hard so that something of his personality stays alive. A tomcat has it so easy, he has only to spray and his presence is there for years on rainy days."
Theophile Steinlen
Steinlen's home in Paris was called "Cats Corner". In addition to paintings and drawings, he also made a few sculptures, most notably figures of cats that he loved greatly. Many of his paintings also include images of cats. Recognize this painting? 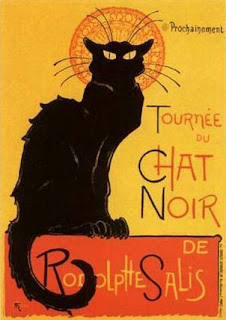 Mark Twain
Twain shared his farm in Connecticut with eleven cats. Twain wrote, "I simply can't resist a cat, particularly a purring one. They are the cleanest, cunningest, and most intelligent things I know, outside of the girl you love, of course." Another cat quote by Mark Twain states,"If man could be crossed with the cat it would improve man, but it would deteriorate the cat." 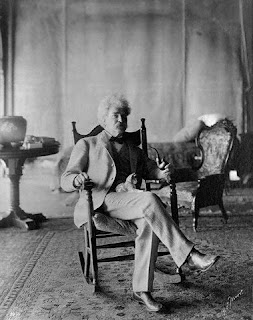 Are Dictators Cat Haters?
The cat lovers that we are, it is difficult for us to imagine that some people dislike cats. Of these "cat haters" many of them are infamous dictators. Perhaps it is because these men who can control entire countries and hope to conquer the whole world cannot stand the fact that they cannot control independent and strong-willed cats. These dictators included Genghis Khan, Alexander the Great, Julius Caesar, Napoleon Bonaparte, Benito Mussolini, and Adolph Hitler.
Posted by catsandcoffee at 11:58 AM